What Went Wrong – Emo of Steel

Last time I wrote an Address talking about the DC Movie line-up announced at the SDCC.  In it I mentioned how I wasn’t a fan of the Man of Steel movie that essentially introduces the DCCU the same way Iron Man did for the MCU.  Because of this, I’m not yet overly excited about the DCCU yet.

So, for your reading pleasure, I’m going to tell you What Went Wrong with Man of Steel so you can join me in my extreme mild curiosity about the new DCCU.

We start off on a Krypton unlike any we’ve ever seen.  We’ve seen a crystal based Krypton, and a technological utopian Krypton.  This time we get one of those weird fantasy worlds where technology seems to be centuries ahead and behind at the same time.  There are many things to point out here but instead of nitpicking, let’s just focus on our main villain, Zod. 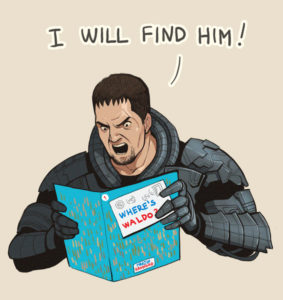 Supposedly Krypton’s greatest General turned traitor.  Personally, I don’t see how he made it pass Sargent.  He attacks the council with a small force then immediately runs off to chase after Jor-El.  He’s after him because Jor-El stole an item so important, Zod waited until he was mid coup before going after it.  And it’s not like it would have been difficult to do first.  Jor-El only had to swim through a short tunnel and just grab it.  Not the most secure “Future of the Kryptonian race”.  Then, before entering the House of El he’s notified that a rocket engine has been engaged inside but he doesn’t immediately position one of his fighter jets in a position to intercept whatever it may be.  Instead, his order is to “hold the platform” as if the rocket is going to stroll out the front door.  The man has a small army and is undone because he wanted to walk in alone and get in a fist fight with a scientist.  A fight he only won because he pulled a knife and stabbed the guy while he wasn’t looking.  This is our bad guy, ladies and gentlemen.  Fear him.

BTW, am I the only one baffled by how a technologically advanced people can mine out the core of their own planet and be surprised that bad things happened?

Now onto the meat of this crap sandwich.  What really went wrong here?  Why didn’t it work?

Simple.  Because it didn’t come off as a superman story.  It was more like a “What if Bruce Wayne had powers?”  We spent half the movie watching him being psychologically tortured as a kid and being dark, brooding and mysterious as an adult.  Even having a parent die.  That’s Bruce’s thing.  Which brings up the second most controversial issue with this film.  The new Kent Philosophy.

According to this new Pa Kent, it’s probably OK to let people die as long as no one finds out about you.  The film tried to pull off that he was just trying to protect his son but it just came off as callous and selfish.  The Kents constantly kept telling Clark how he was destined to do great things, then chastised him everytime he did great things.  Even Jonathan Kent dying was completely unnecessary.  The only reason he died was because he hurt his leg and couldn’t run back.  If he let Clark go, he wouldn’t have had to do anything more amazing than run at a normal pace. 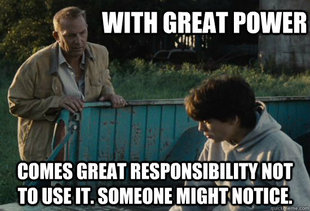 Now, some people bring up all the death and destruction in the final fights.  If you think about it, though, it makes sense considering Clark’s lack of combat training and experience.  Although this does give us another issue.  How does a guy who’s never been in a fight defeat an army of trained soldiers who all have the same abilities as him?  Chew on that for a while because I haven’t figured it out yet. 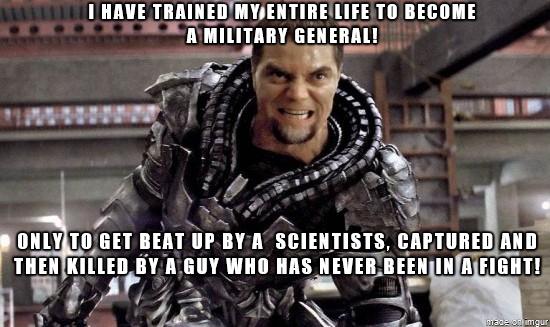 The inexperience does work in one aspect though.  Breaking Zod’s neck.  I wrestled in high school, so I saw at least a half dozen ways to bring him down without killing him but Clark doesn’t have that knowledge.  Despite having him in a rear naked chokehold, giving him full control over Zod’s neck, He didn’t know that he could just move the guys head slightly to the left, saving those people without bloodshed.  Instead he took the guys head and turned it all the way around.  Seriously, though, after all the Jesus imagery, it’s pretty jarring to see the hero killing unnecessarily.

Finally, the most controversial thing in the movie.  Not the Kent Philosophy.  Not Superman killing.  It’s the blatant product placement.  Amidst all the destruction and explosions, these store signs remain pristine and clearly visible just to make sure you know their name.  At least 4 companies got to display themselves as indestructible beacons of consumerism.  It would be so bad if it weren’t so blatant and at least tried to pretend to be a part of the scenery.

And that’s What Went Wrong with Man of Steel.  Believe me there was more to pick on but I don’t nitpick.  Much.  Your welcome.